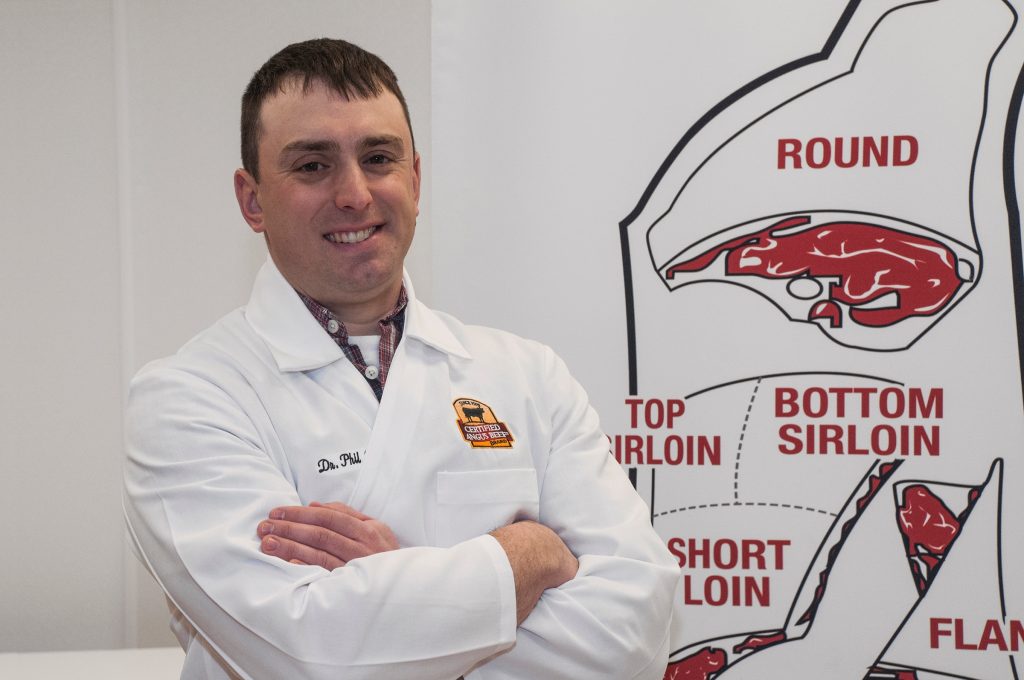 His craft is also his profession. As the corporate meat scientist for the Certified Angus Beef ® brand, Bass shares his expertise with chefs, foodservice distributors, retailers and consumers alike. He’s often cutting beef in the Certified Angus Beef ® Education & Culinary Center, where they hang on his every word. He discusses the finer details and flavor traits of one cut versus another, identifying new items for restaurant menus and retailers’ meat cases. According to Bass, meat cutting is a fine art, much like brewing beer or making cheese and sausage. “Anybody can cut meat, but if you cut it the right way, you get highly desirable pieces from what once was thought of as a less desirable cut,” he says.

Where do you live: Sterling, OH

Favorite style of Burger:  A simple cheeseburger. I like to be able to taste the meat -so keep it simple. But, a little cheese on the burger makes me feel more American!

Favorite Childhood Burger:  No Brand Burger Stand (a little burger shack in my hometown across from the high school) double cheeseburger. I’m not sure what they do or where they get their meat, but their burgers were, and still are, legendary in my hometown of Ferndale, Calif.

Burger that haunts your dreams at night: No Brand Burger Stand (see above) double bacon Cajun cheeseburger … right before wrestling practice in high school. A great burger, but not good timing … let’s leave it at that!

What is the one Burger you’ve always wanted to try but still have not:  The Mt. Rushmore at First Amendment in Wooster, Ohio. Three pounds of Certified Angus Beef ® brand ground beef, topped with all the trimmings. When it’s said and done, this massive burger weighs in around 6 to 7 lbs. I totally have to try this thing. They say it’s for 4 to 6 people, but apparently they don’t know how much I like hamburgers!


The secret to making a great Burger: Don’t be afraid to get ground beef with a higher fat content. I would say that a 20% fat Certified Angus Beef ® brand chuck blend is one of the most popular go-to burgers that’s out there, and it’s always a success.

Under no circumstances whatsoever, what should NEVER be put on a Burger: Fish! There’s a time for surf and turf, but not on my burger. Besides, I can’t eat fish anyway and that would be a big downer for me if I was denied my beloved burger on an anaphylactic technicality.

If you could eat any Mythical Creature which would it be: Babe the blue ox … just imagine all of the hamburger you could get off of that beast!


If you could have a Burger with anyone alive, or dead, fictional or real, who would it be and where would you take them: Definitely I would go have a burger with my Nono (grandfather) Dini, who passed away when I was very young. I know a lot of folks have fond memories of sharing a burger with their grandfather and that’s one that I unfortunately missed out on. We’d probably just eat it at my grandparents’ house, as my Noni (grandmother) Gloria has always been a great cook, and still is!

Name one Burger in LA that for once, people should get off a plane and go eat instead of In-N-Out: In-N-Out is a legendary California institution and if you’re a real California native, there is no substitute. Enough said!

Please use this space to talk about or plug anything else you want: Beef steaks, burgers, roasts, bone in or out, grilled or roasted – there has, perhaps, never been a man more passionate about meat than Dr. Phil Bass. He helps consumers and chefs “Phil in the blank” with the best cuts and quality selections. His interest in cutting meat began at a young age in his hometown of Ferndale, Calif.

“I grew up cutting meat as soon as I was tall enough to reach the table in my grandmother’s garage,” says Bass, who holds a doctorate in meat science from Colorado State University. “I’ve just always found it fascinating. With meat, you get to cut into it, see how things work and choose the best cuts for the dinner table.”

His official titles include affiliate faculty member in animal sciences at Colorado State University. In this role, he is actively engaged in graduate student programs and the latest meat research. His expertise is taking their information and bringing it to the table for chefs, food companies and consumers to embrace. For his leadership in this arena, Bass was named to the “Top 40 under 40” by Vance Publishing in 2014.

Keeping it light today with this Burger salad from

Brunch for a crowd? We've got you covered! Our Por