The South Beach Wine & Food Festival returned to Miami, FL in 2022 and it was filled with delicious food, overflowing drinks and of course, amazing Burgers at the Red Strip Burger Bash presented by Schweid & Sons and hosted by Jose Andres. Originally Rachael Ray was supposed to co-host but was not able to make it so Guy Fieri stepped in to crown the winner!

Walking around under the tent on the sand, we saw that the competition was steep amongst the different contestants. There were Burgers that ranged from classic Cheeseburgers like The Pit Stop Burger from Verge at the Concourse Club in Miami.  This Burger was made with a Schweid & Sons Wagyu Beef Patty, Aged White Cheddar, Special Sauce and topped with House Pickles on a Martin’s Potato Roll. 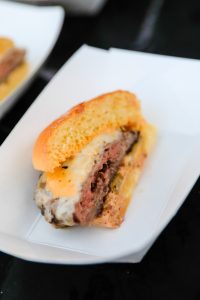 All the way to the Umami Brown Butter Burger which featured a Schweid & Sons Beef Crumbled Smash Patty with Dashi Brown Butter, Umami Onions, BBQ Aioli, and White American on a Squishy Bun by Umami Burger by Alvin Cailan. 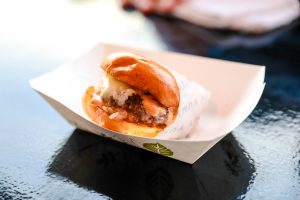 Checking in on last years winner, we caught up with Ted’s Burgers who was cooking up an OKC Fried Onion Smash Burger which is a Schweid & Sons Double-Smashed Ground Patty, Thinly Sliced Sweet Onions and a Slice of American Cheese topped with their special “T” Sauce and Homemade Pickles. 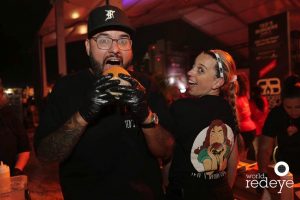 We also checked out American Social Bar & Kitchen and their Rude Boy Burger which was a Schweid & Sons Jerked Seasoned Patty with Manchego Cheese, Pikliz, Tomato, Onion, and a Chimichurri Mayo served on a Pretzel Bun 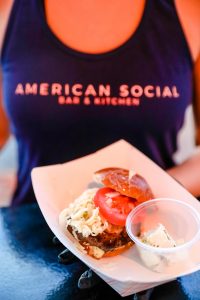 For SOBE 2022 Red Stripe Burger Bash, we had an esteemed panel of judges who love food, love Burgers and definitely love a good time! 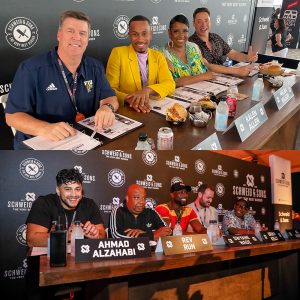 Now, onto the winners of the coveted Very Best Burger Award. The judges of both sessions ate a lot of Burgers and judged a blind taste test of all the participants. Our trusted Schweid & Sons employee tallied up all the votes and 1 winner came out victorious for each session! 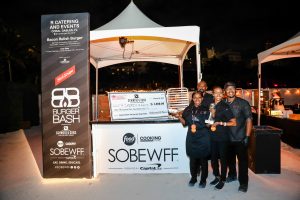 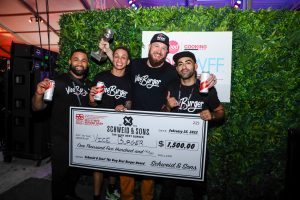