Natalie Morales is the news anchor of NBC News’ “Today” and the co-host of the third hour, a position she has held since March 2006. Prior to her role as news anchor, Morales served as “Today” national correspondent from February 2006 to June 2011.  Morales has also reported for all NBC News platforms including “NBC Nightly News,” Dateline NBC,” and MSNBC.

While working for NBC News, Morales has reported on and contributed to several major breaking news stories. As a part of TODAY’s ‘Shine a Light’ Campaign in 2014, Morales ran in and raised over $70,000 for victims of the Boston Marathon.  Morales was a member of the “Rock Center with Brian Williams” team who won a Robert F. Kennedy Award for their lobster divers story in June of 2013.  Twice Morales flew to London for major coverage of the Royal Family, both in 2013 and 2011, where she reported on the birth of Prince George and the Royal Wedding, respectively. In October 2010, Morales live-translated and reported on the Chilean miner rescue—coverage that was seen worldwide and recognized with a 2010 National Headliner Award. Her other notable reports include the 2009 presidential inauguration; the Southern California wildfires; the Minneapolis bridge collapse; Hurricane Katrina and Hurricane Sandy; the 2004 Tsunami; the death of Pope John Paul II and the election of Pope Francis..  In 2010, 2011, and 2012 she was awarded a Daytime Emmy award as part of “Today’s” recognition as the best morning news program. Morales was also honored with the 2013 Gracie Award for Outstanding Series for her Dateline series, My Kid Would Never.

Where do you live: Hoboken, NJ

Burger that haunts your dreams at night: Fat Burger. Both times I was pregnant that was what I craved.

What is the one Burger you’ve always wanted to try but still have not: Burger Joint at Le Parker Meridien hotel in New York. I’ve heard so many great things!

The secret to making the Very Best Burger:  Great quality beef – or whatever main ingredient you use.

Under no circumstances whatsoever, what should NEVER be put on a Burger: Chocolate or marshmallows.

If you could have a Burger with anyone alive, or dead, fictional or real, who would it be and where would you take them: Bono. I would love to hear his stories and hear him sing. I’d take him to 21 Club for a good pint and burger.

We’ve hand selected Natalie to be one of the official judges for the 2016 South Beach Wine & Food Festival® Amstel Light Burger Bash presented by Schweid & Sons and hosted by Rachael Ray. 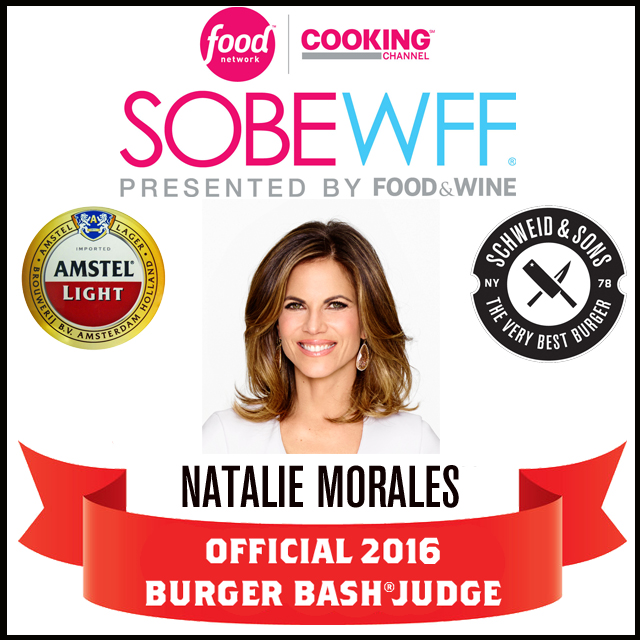